Have you ever been in a service when suddenly the atmosphere shifts and things seem to suddenly change! It is as if time stands still…. As if suddenly you knew that He walked in!  See, when He walks in things must change!  When He decides to come into a place other things must take a second place.  For Him to dwell other things might get interrupted or disturbed!  The desire for more of Jesus will always produce three things: The frustration of knowing there is another level; A passion to keep pushing forward; and a thirst that will not be quenched by yesterday’s encounter.  We have been living off yesterday’s encounter for too long.  I cannot shake the stirring that God is moving and longs to do a new thing – to disturb the status quo. 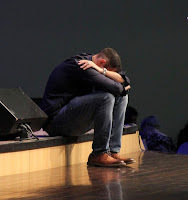 I love this quote by Sir Francis Drake, “Disturb us, Lord, when we are too well pleased with ourselves. When our dreams have come true because we dreamed too little. When we arrive safely because we have sailed too close to the shore. Disturb us, Lord!” Isn’t it time we got disturbed!  As you are even reading this newsletter, I challenge you to say those words, “Disturb me, Oh Lord!”

In John, we find a woman named Mary who got interrupted and disturbed when He walked in.  John 20:16-17 says, “ Jesus said to her, “Mary.” She turned toward him and cried out in Aramaic, “Rabboni!” (which means “Teacher”). 17 Jesus said, “Do not hold on to me, for I have not yet ascended to the Father. Go instead to my brothers and tell them, ‘I am ascending to my Father and your Father, to my God and your God.’” You see, this was the same Mary who had washed His feet (Luke 7:38).  The same one that had met Him on the road in John 11 but this time was different.  This time something had changed.  Now there was a shift! He said “don’t touch me!” Why?  The answer to why is something God shared with me early one morning just over a month ago, when at 4:50am, He woke me up asking if He could interrupt me.  The reason something was different this time that Mary saw Him was because Glory had interrupted her fleshly reaction!

I love the anointing, but is there more?  Could it be I had settled? I had fallen in love with the touch of God upon me; rather than desiring the God of the touch? Now here is the intersection I mentioned…  After the anointing comes the glory.  Too often we have stopped at the anointing but we must realize there is more, there is glory!  The key to His glory is that - Glory Follows Order!  From the very beginning we see God’s order in things, from the creation of the earth we see an order and then His glory dwelled.  When He tells Moses to build the tabernacle for His glory to dwell, we see specific instructions and then His glory filled the tabernacle.  Glory follows Order!  Each time they built an altar, then a temple and then a sacrifice was placed and then the glory came! You will never have glory without sacrifice.  It might not be fun in the moment or seem hard at the time but it’s bringing you to the Glory!  And the Glory is worth it!  When you make an adjustment, another level comes. The anointing is the key! The altar is the Door! The Glory is the reward!

The Glory of God has always been an orchestrated interrupter and when it comes in, the anointing must take a back seat.  We can’t just settle for the anointing! Could it be that we have not tasted glory… because somewhere along the way it will require the death of the agenda and the establishment of His authority. We have settled for grace, become enamored with the anointed and reduced the glory to lights, sound and inaction! We celebrate gifting’s on stages, but I cannot find in God's Word where the seduction of man's eyes on the stage of approval to have ever caused the reduction of Satan's power in someone’s life.  If we love the anointing and God’s touch on our lives more than God taking control, then we have fallen to the same lie that Satan believed in Heaven. Gifting's personified does not mean that God is glorified. We must resign from the plaudits of man.  To preach a happy message without the Holy message removes the power of the message and negates the messenger.  Anointed leaders without the Glory equal a powerless church.  1 Cor. 2:4, “My message and my preaching were not with wise and persuasive words, but with a demonstration of the Spirit's power, so that your faith might not rest on human wisdom, but on God's power.” So, let’s get back to Mary and her intersection with Jesus after the resurrection.  Mary shows up in the garden and she wants to cling to Jesus like she has before, but He was different.  We must resign from yesterday’s touch! 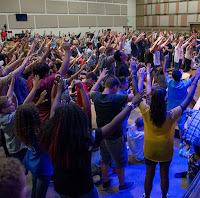 We must become reflectors of His glory!  2 Cor. 3:18, “So all of us who have had that veil removed can see and reflect the glory of the Lord. And the Lord— who is the Spirit--makes us more and more like him as we are changed into his glorious image.”  The church must stop treating Jesus as a moment! Baptism by fire is for every day. Glory has come to us. We are now what Father has purposed to display.

I realized in my God interruption that early morning that it was time for my resignation!  The restoration of glory will require the proclamation of the resignation of self ! The enemy is after your anointing, but he is afraid of the Glory! So, His goal is to torture the saints and reduce the called!  Until your anointing cannot be robbed from you by crowds, numbers, insecurity, circumstance and pain you will always sell it off as cheap lip balm to the first voice of compromise!

I’ll end this blog with a question.  So, which Saul are you?  There are two Saul’s in the Bible and they are very different.  The difference in Saul in the Old Testament and then Saul (Paul) in the New Testament. Saul, the King was anointed by Samuel, but the murderer Saul was anointed by Glory. King Saul had built one altar in his life, 1 Samuel 14:25, Then Saul built an altar to the LORD; it was the first time he had done this.”  In contrast, Paul (Saul) in the New Testament lived on the altar!  Phil. 1:21, “For to me, to live is Christ and to die is gain.” King Saul was rejected by God!  1 Samuel 15:26, “But Samuel said to him, "I will not go back with you. You have rejected the word of the LORD, and the LORD has rejected you as king over Israel!"  Saul desired man’s approval more than He desired God’s.   Even when he had sinned against God, he begged Samuel to go with him before the people just for appearances.    1 Samuel 15:30, “Saul replied, "I have sinned. But please honor me before the elders of my people and before Israel; come back with me, so that I may worship the LORD your God."  But then there is the other Saul, Paul, who has an encounter with His glory and is forever changed.  He died to his own desires.   Galatians 6:14 (NLT), “As for me, may I never boast about anything except the cross of our Lord Jesus Christ. Because of that cross, my interest in this world has been crucified, and the world's interest in me has also died.”

It all starts with the invitation to God to invade my life and destroy my flesh. We must make a place for the weary traveler called “The Holy Spirit”.  We must humbly approach God! He is not asking for your talent, but rather looking for your brokenness.  I believe God desires to walk into all our lives today and manifest His Glory.  I pray that He interrupts your day, your week, your month … I challenge you to say, “Disturb me, Oh Lord” and begin to move past the normal and seek His Glory!