Lest They Perish From Hunger 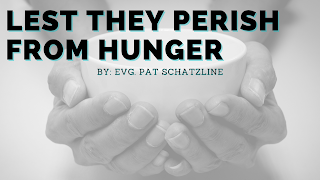 *In advance, I want to thank all the leaders and churches who are willing to speak the uncompromising truth with power, love, and soundness of mind. Stay the course!*

Prov. 8:1–3 (TPT), “Can’t you hear the voice of Wisdom? From the top of the mountains of influence she speaks into the gateways of the glorious city.”

I must share my heart. Somewhere throughout the years… It was taught to the young students of the ministry that Christian leaders should stay out of social issues and political issues, or else their influence, status, and church growth would suffer.

Where did this come from? Maybe it happened in the ministry schools or church growth conferences where status, numbers, and ability to pontificate became more important than steel backbones and scrapped knees.

Maybe it happened when our tax status was threatened by Mr. Johnson (1954, H.R. 8300), and weekly tithe determined our messages. Perhaps it happened when the altar experience became a 15-minute worship set forgoing a profound encounter of repentance and restored purpose that has now created a Saul Generation that loves worship more than word because it soothes their demons. Maybe it happened when the daily secret place was abandoned for a connection at a coffee shop.

Nevertheless, it has created a vacuum in culture that has been filled by politicians, radical societal hoaxes, and pundits. The separation of church and state mindset (not in the constitution) has created a state of separation. Parents and Grandparents, and trusted stewards of the next generation alike are in desperate need of answers and responses to the anti-Bible street gang. Still, often they leave church gatherings with nothing more than a melody of mediocrity that has not weaponized them to rescue their inheritance. The sheep will know his voice only when the shepherd is not synergizing with the wolf that devours the young lambs with cultural hoaxes parlayed for the identity of our children. We must declare the truth. We must not sit on the sidelines as culture devours our children, marriages, values, and purpose. We are called to be a mobile upper room. We are called to release a message of freedom, truth, and hope! We are not called to be pastry chefs in Hell’s Kitchen, but instead, we must deliver the meat of the word to fill the empty stomachs of a malnutrition bride. We mustn’t send them away hungry but full of sustenance for the battle.

Jesus called his disciples to him and said, “I have compassion for these people; they have already been with me three days and have nothing to eat. I do not want to send them away hungry, or they may collapse on the way.” (Matthew 15:32)

Leaders, your voice is needed now more than your desired influence. Now is the time for the Remnant (Romans 11:5) to arise and speak truth.  Remember, “Some of you will rebuild the deserted ruins of your cities. Then you will be known as a rebuilder of walls and a restorer of homes.” Isaiah 58:12

Will the next generation say of us, “They were quiet for the wrong reasons and loud when it fit their season?”

This generation is begging for answers. We must give them God’s truth with authority and love word before cognitive dissidence quiets our relevance.

Jesus said in Matthew 11:16-17, “To what can I compare this generation? They are like children sitting in the marketplaces and calling out to others: ‘We played the pipe for you, and you did not dance; we sang a dirge, and you did not mourn.’”

Whelp, Gotta go! Church is starting, worship team is in place, the lights are being lowered, and the sign on the front door says, “Closed for business! Culture Won!”

Ps. We are not called to create followers or fans, but disciples of Christ.

Find out more about Evangelists Pat and Karen Schatzline by going to: www.raisetheremnant.com

Watch and listen to powerful messages by Evangelists Pat & Karen by going to their YouTube channel, "Pat and Karen Schatzline" or click: http://www.youtube.com/RemnantMinistriesInternational
Posted by Remnant Ministries International, Pat Schatzline at 1:42 PM No comments: