Take Back the Night! 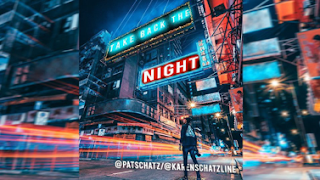 1 Peter 5:8 (TPT), “Be well balanced and always alert, because your enemy,the devil, roams around incessantly, like a roaring lion looking for its prey to devour!”

I am here to talk to the ones that have had your dreams stolen, the ones who feel lost or wonder where the light has gone. Can I tell you that tragedy has a trajectory.  The painful memories from yesterday often determine whether we have peace today. As a result many believers live in fear that tomorrow will bring great pain or sorrow rather than trusting Jesus in the now. Jesus said in Matthew 6:34, “So don’t worry about tomorrow, for tomorrow will bring its own worries. Today’s trouble is enough for today” (nlt).  We cannot change where we have been or what we have been through, but we can change how we let it control us.

I want to tell you – it is time to “TAKE BACK THE NIGHT!”  There is a powerful scripture in 1 Kings 3:21 that says, “When I got up in the morning to nurse my son, here was this dead baby! But when I looked at him in the morning light,I saw immediately that he wasn’t my baby.” It is in the dark that your identity can be replaced with a dead imposter. When we are in the night, in the dark, we have a hard time seeing the truth, we can mistake something false for something real. But I believe so strongly God is stirring and calling us out of the night season and into a new and glorious light.

Let’s take a deeper look at 1 Kings Chapter 3. We find God asking Solomon what he would like to be given, Solomon’s reply is found in 1 Kings 3:9 (message), “Here’s what I want: Give me a God-listening heart so I can lead your people well, discerning the difference between good and evil. For who on their own is capable of leading your glorious people?” God replies to Solomon, 1 Kings 3:12, "I will do what you have asked. I will give you a wise and discerning heart, so that there will never have been anyone like you, nor will there ever be.” Then he goes to the throne. It is so interesting that Solomon had just been given his identity (as the king) and now the first case to come before him would be one that puts identity at stake. The identity of an innocent child.

The enemy is and always has been after identity. You see, the devil lost his identity and ever since he has been trying to get it back by attempting to steal it from others. He got Adam to forfeit it in the garden and he tried to get Jesus to do the same in the wilderness.  Two of the three temptations in the wilderness Jesus faced were directly at His identity. “If you are the son of God …”.  The enemy wants what he lost, he wants what you and I can have.  Sonship! Daughterhood! We are children of God!

Before we look further at 1 Kings, I must share with you a recent Word gave to me. Early on morning in my prayer room, after hearing a scream cry out a few weeks back, God said,  “The cry that you heard is that of birth pains. The birth pains have begun! The water has broken. The bride is in labor. Call forth the midwives to grab the towels and the water. The time has come for deliverers to arrive. Prepare for the sons and daughters to come forth. These will be those that will usher in the greatest harvest the world has ever seen.” This is the moment you need to realize that God has been waiting on you!  Romans 8:19-21 (TPT), “The entire universe is standing on tiptoe, yearning to see the unveiling of God’s glorious sons and daughters! … But now, with eager expectation, all creation longs for freedom from its slavery to decay and to experience with us the wonderful freedom coming to God’s children.”

There is an all-out attack against you! The enemy wants to take you out! He wants your identity. You are a threat to him and so he tries in the night, in the dark, to confuse and cause question and doubt. But it is time to “Take Back the Night”!

Back to 1 Kings 3, check out Solomon’s very first case, 1 Kings 3:19-21 (message), “The infant son of this woman died one night when she rolled over on him in her sleep.  She got up in the middle of the night and took my son—I was sound asleep, mind you!—and put him at her breast and put her dead son at my breast. When I got up in the morning to nurse my son, here was this dead baby! But when I looked at him in the morning light, I saw immediately that he wasn’t my baby.”

You see, the enemy wants what he didn’t purchase. From the moment you arrived the enemy has been plotting! He’s been trying to make you forget who formed you. Jeremiah 1:5, "Before I formed you in the womb I knew you, before you were born I set you apart; I appointed you as a prophet to the nations." You were made in the dark! Psalm 139:13,“You formed my innermost being, shaping my delicate inside and my intricate outside, and wove them all together in my mother’s womb.” Don’t let the night take your identity!

Darkness has many forms:

DECEPTION
The enemy wants your mind… 1 John 1:6-7, (message), “If we claim that we experience a shared life with him and continue to stumble around in the dark, we're obviously lying through our teeth — we're not living what we claim. 7 But if we walk in the light, God himself being the light, we also experience a shared life with one another, as the sacrificed blood of Jesus, God's Son, purges all our sin.” 2 Corinthians 4:4, The god of this age has blinded the minds of unbelievers, so that they cannot see the light of the gospel that displays the glory of Christ, who is the image of God.

FEAR
And as you know, fear is one of the main weapons the enemy uses to keep us in the dark. Faith is the antidote to fear. God has given us weapons to defeat fear! 2 Timothy 1:7, “For God has not given us a spirit of fear and timidity, but of power, love, and self-discipline.”

WEARINESS & DEPRESSION
Weariness and exhaustion have the ability to not only quiet the dream but also silence the messenger. If we are not careful, weariness can cause us to go into hiding rather than into a place of rest. Proverbs 13:12 says, “Unrelenting disappointment leaves you heartsick, but a sudden good break can turn life around.”

The night has the ability to make you think morning will never come! Many have built a monument of pain and sorrow at the place they were harmed or hurt the most. Instead of realizing we survived “the worst,” we continually visit the tombstone of yesterday’s pain, allowing its shadow to dictate the peace we walk in today. Far too often the greatest attacks against the spirit and mind come from the shadows that loom over life instead of the reality that God is still in charge.  It is impossible to look forward when you are busy fearing what is behind you.

It is time to take back your night! WAKE-UP! Turn on the light! Quit hiding in the closet of fear! What starts as fear and self-preservation can actually become the story that leads your restoration. God has the power to change sleepers into reapers, orphans into sons and daughters, and widows into brides.

God speaks at night! Jesus came to interrupt nightmares! It is your night season that the God light in you reduces the enemy to a shadow of what he used to be, your greatest fear reality! The one who made you will protect you!

Back to I Kings 3, remember Solomon prayed for wisdom. Solomon’s first ruling was to declare identity.  1 Kings 3:22-27 (Message), “Not so!” said the other woman. “The living one’s mine; the dead one’s yours.” The first woman countered, “No! Your son’s the dead one; mine’s the living one.” … The king said, “What are we to do? This woman says, ‘The living son is mine and the dead one is yours,’ and this woman says, ‘No, the dead one’s yours and the living one’s mine.’”…  Then he said, “Cut the living baby in two—give half to one and half to the other.” The real mother of the living baby was overcome with emotion for her son and said, “Oh no, master! Give her the whole baby alive; don’t kill him! But the other one said, “If I can’t have him, you can’t have him—cut away!”  The king gave his decision: “Give the living baby to the first woman. Nobody is going to kill this baby. She is the real mother.”

The one who gave identity to the child would protect it from the thief that stole the identity. The one that formed you…The one that breathed life into you…The one that plans your future...The one that knows who you are…Can interrupt the nightmare! He will protect you! We are called to be bold as lions! You and I are called to roar! Regardless of how exhausted and weary we become, we must seek the Lord once again. We must once again take our rightful place of authority.  We must break free from fear and TAKE BACK THE NIGHT!

*Listen to Evg. Pat Schatzline preach this powerful message, “Take Back the Night”

*This article taken from excerpts of Restore the Roar, Chapter 4 – “When the Shadow Looms”, by Authors Pat and Karen Schatzline

Pat Schatzline is an international evangelist and author who coleads Remnant Ministries International with his  wife, Karen. Their newest book Restore the Roar released August 6th, 2019. Pat and his wife are known for their passion to lead people of all ages into deep encounters with God. They are frequent guests on Christian television and radio shows such as Sid Roth’s It's Supernatural! andThe Jim Bakker Show as well as networks such as Daystar and GOD TV. They have written several books, including Why Is God So Mad at Me?, I Am Remnant, Dehydrated, Unqualified, and Rebuilding the Altar. You can follow Pat on social media @Patschatz
Posted by Remnant Ministries International, Pat Schatzline at 12:44 PM No comments: